No such thing as a lost cause...

Ring marks in your polish? Chair in pieces? Table top split in two? –

If you think there's no hope for your beloved piece of furniture, take a look below at some of the miracles we've worked in the past!

This Chinese chest had certainly seen better days when it arrived in our workshop - first and foremost, there was a large split right down the centre of the main section of carving. It had also previously been polished to a very dark colour, which obscured the intricate detail of the carved images; the owner asked that we both repair and disguise the split, as well as stripping back the existing finish and reviving the natural colour of the wood. Can you spot the join? We can't and we're the ones who fixed it!

Ring marks on table tops are one of the most common types of damage we see in the workshop; the chances of us being able to remove them often depend on the type - water or burn - and how far down they have penetrated. This one was a particularly tricky case, made more difficult by the fact that Mahogany can become garishly red in colour after stripping and repolishing. Luckily, we have formulated a complex technique for avoiding this particular pitfall and were able to make the ring marks entirely disappear. Just another workshop miracle...

This breakfast table, veneered in an unusual segmented and book-matched pattern in Flame Mahogany, arrived in our workshop having aged to a rather sickly yellow and green colour. All parties agreed that stripping the table right back down to the veneer and French polishing it anew would be the best recourse. After a lengthy stripping process, the table was painstakingly sanded as the grain ran in so many different directions (and you must sand in line with the grain) and finally polished. True to its name, the fiery grain of the Flame Mahogany revealed itself and the table's colour transformation was complete!

Occasionally there comes a point in a restoration project where causing surface-level damage is, strange though it may seem, desirable. Our primary goal as furniture restorers is rarely to make something look brand new (unless we receive a specific request), but rather to disguise our work so that it's as un-intrusive to the original look of the item as possible. In this case, the door to a large, 17th century hall cupboard, tucked away in a hidden room within Fortnum & Mason, had vanished into thin air. We were tasked with manufacturing a replacement; no mean feat, given the linen-fold carving, and made trickier by the necessity of realistically ageing it by 350 years or so...This was achieved through judicious use of hammers and chisels to scar it, stains and pigments to colour it and a liberal application of dust, rubbed into the grain many times over. 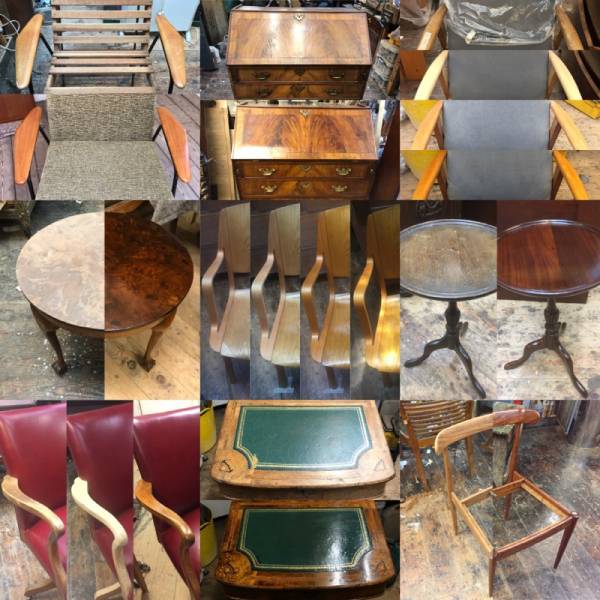 Want to get a more in-depth look at the restoration process?

If you're intrigued by what you've seen in these before and after pictures, keep an eye out for our upcoming Furniture Restoration blog where we'll be breaking down recent projects, step-by-step, so you can see just what it takes to bring a piece from the brink back to its former glory.

Bonus Before & After: The Work Boots

These are identical pairs of boots, one brand new and one 5+ years old - wonder if you can guess which is which? Not exactly one of our restoration projects, but this is what happens to a pair of work boots when they see a lot of action down in our workshop...Notice the steel toe caps poking through; they may make the boots considerably weightier, but you remember why you have them every time you drop something heavy onto your feet and don't suffer the consequences! (Don't mention dropping things in the workshop... - Ed.)

Interested in seeing your own furniture before and after restoration?

We can help - ask for a free estimate now!

Start off by emailing us some photos, as we can usually provide an estimate from them - and after that, if you would prefer to arrange for us to visit your home or office you can contact us;

Not sure if it's something we would restore?

Don't feel embarrassed to ask. If you're not sure what you've got, can't identify the wood, don't recognise the age or period -

don’t worry, that's our job, not yours and we're very good at it too! We're here to provide you with free, honest advice.

We'll tell you what it is, where it's from and whether or not it's worth restoring. We really can restore most things -

you'd be surprised at the state of things we've been able to rescue.

Click the Email Us button on the left for a free estimate or read more by clicking the button below.